American sci-fi writer, Theodore Sturgeon famously said, “Sure, ninety percent of science fiction is crud.” He believed that was “because ninety percent of everything is crud”, but many literary purists think sci-fi’s exotic worlds, flamboyant characters and incredibly imaginative plots make it throwaway. Yet, if they delved a bit deeper, they’d find a profound genre that’s both rich in themes and perhaps, more surprisingly, in language too. In fact, over the years it’s given us a myriad of new words, the majority of which have been created in order to describe concepts and devices that didn’t have existing words in their time. Most of these words have never been incorporated into our everyday language. However, sometimes technology catches up to sci-fi and a fictional word gets borrowed and becomes a common term. In other situations, a sci-fi author doesn’t necessarily coin a word, but uses it and popularizes it, keeping it alive and in use.

So, ready yourself for blast off as we count down 10 of our favorite out-of-this-world words and phrases from science fiction that have become part of our everyday lives.

The phrase atomic bomb is first recorded in H. G. Wells’ 1914 work The World Set Free. Based on the available research of the time, he had envisioned the atomic bomb to be something that would have the force of an ordinary explosion, but that would continue to explode indefinitely. The novel is said to have been partially responsible for motivating Hungarian physicist Leó Szilárd, who was an acquaintance of Wells, to succeed in his work with the first nuclear chain reaction. Wells’ The Time Machine also gave us the terms time machine and time traveller in 1894.

The credit for spaceship in the sense of “a manned spacecraft” usually goes to J. J. Astor’s 1894 novel A Journey in Other Worlds, a futuristic tale set in the year 2000. However, space-ship also appears in an 1880 Pall Mall Gazette, in reference to Jules Verne.

Spaceship is one of the many examples of nautical terms being applied to the new context of space–using a familiar set of words allowed writers to easily convey their new ideas to readers. The similarities between sea and space exploration made the particular word set a logical choice, while the sense of romance and adventure associated with the sea made it a desirable creative choice.

The coinage of this term is up for debate. It’s commonly cited as first being used by Jack Williamson in his 1951 novel Dragon’s Island; however the Oxford English Dictionary cites a 1949 use in Science. Other sources claim that Danish microbiologist A. Jost coined the term in a 1941 lecture. In any case, genetic engineering has been a major theme in sci-fi since the beginning of the genre and has certainly helped to introduce the term into the lexicon.

You probably already know this one. Although later popularized by Isaac Asimov (known for coining the term robotics), robot, derived from a Czech word for “forced labor”, originally comes from Karel ?apek’s 1920 play R.U.R.: Rossum’s Universal Robots. According to ?apek, he had originally planned to use the Latin word labori for the artificial workers in the play until his brother Josef suggested he use roboti instead. The earliest cite for the shortened version bot is 1969, in Richard Meredith’s We All Died at Breakaway Station.

The imitative word beep had been around since the 20s in the sense of “beeping a car horn”, but Arthur C. Clarke is credited as being the first to use it in the sense of a “short electronically-produced and high-pitched sound.” The word is cited as first appearing in his 1951 novel The Sands of Mars, although it seems likely to have been in use for some time already.

OK, so this one wasn’t exactly coined by a sci-fi writer–it was actually coined in 1974 by NASA scientist Jack Cover, the creator of the Taser. He chose to name the electroshock weapon after one his favorite childhood books, Tom Swift and His Electric Rifle, modeling the new word on laser and creating an acronym from the phrase Thomas A. Swift’s Electric Rifle. Although it’s a trademarked word, Taser has become a generic term for stun gun (like Kleenex for tissue). We have yet to agree upon a verb form of Taser–taser, tase, tazer, and taze are all commonly used, with still another faction of people totally against using it as a verb, suggesting the use of stun instead.

A number of different sources have been credited as giving us the phrase blast off (for example, the 1950 TV series Tom Corbett, Space Cadet), but the earliest use recorded so far has been found in E. E. Smith’s Galactic Patrol from 1937, in which a character asks “How long do you figure it’ll be before it’s safe for us to blast off?” In addition to blast off, Galactic Patrol also gave us deep space. A use of blast-off in noun form dates from the same year, in Arthur Leo Zagat’s The Cavern of the Shining Pool.

This one doesn’t come from a sci-fi writer, but rather, a sci-fi fan. Fanzine (a portmanteau of fan and magazine) is said to have been coined in 1940 by Russ Chauvenet, who was a major force in the beginning of sci-fi fandom. ‘Zine showed up less than a decade later.

Cyberspace dates from the early 80s, when it was popularized by Neuromancer (1984) author William Gibson. The term comes from the earlier word cybernetics, an area of study involving systems and communication, which itself comes from the Greek word kybernetes, meaning “steersman, guide.”

An example of one of the many sci-fi words that use Greek roots (such as xenomorph, psionics), it was believed that cyberspace was intended to convey a sense of control and power. Gibson later criticized the word, calling it “meaningless” and a “buzzword.” Eventually the cyber- prefix took on the more general meaning of “Internet-related”.

Well, almost. Flash mobs, defined as “a large public gathering at which people perform an unusual or seemingly random act and then disperse, typically organized by means of the Internet or social media”, started in 2003. Larry Niven’s 1973 novella Flash Crowd describes a strikingly similar occurrence, in which people use teleportation booths to join large gatherings and riots as they happen.

Bill Wasik, organizer of the first flash mob, describes how blogger Sean Savage coined the term: “He added the word flash as an analogy to a flash flood, evoking the way that these crowds (which in the original version arrived all at once and were gone in 10 minutes or less) rushed in and out like water from a sudden storm.” Wasik credits Niven’s novella as one of the major reasons why flash mob became the preferred term, saying that it resonated with sci-fi fans that had read Flash Crowd.

While it’s more likely that he didn’t actually coin the word, author of the dystopian classic Brave New World Aldous Huxley gets credit for having the earliest recorded use of it in 1928’s Point Counter Point, where he writes “Such a dear snuggly-wuggly, lovey-dovey little chap.”

The 10 terms that we’ve discussed here are just a few of science fiction’s fascinating lexical contributions that demonstrate the genre’s impact on the English language. In addition to other everyday words, sci-fi has also contributed a huge number of genre-specific words and phrases that have not become part of common speech–and let’s not forget about all the frakking words that popular culture has absorbed from sci-fi film and television. How many others can you come up with? Let us know in the comments below. 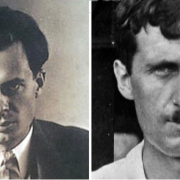