Some things only improve with age: oak trees, hard cheeses, George Clooney… Some novels, also, get better and better; remove them from the initial hype and throw in some historical context and the time to reread (and reread and reread), and you’re left with the most stimulating and rewarding of texts. Here’s a handful of books from the 1960s that we think are ageing particularly well…

Harper Lee’s only novel is about childhood, prejudice, the judiciary system, small town fear, racism, domestic abuse and familial love – none of that gets dated or irrelevant. Scout Finch’s razor-sharp narrative is as funny and poignant today as it was in 1960 and Lee’s characters are still amongst the most vivid in the American canon. And Boo Radley? The most intriguing neighbour EVER. Fact.

A fantasy-adventure story, ostensibly for kids, this is the first in a series by L’Engle about the Murry family children, known as the Time Quintet; it tells the story of fourteen year-old Meg Murry, who sets out to find her father, the missing scientist who’s been working on a government project about something called a ‘tesseract’, a sort of fold in space-time that allows meg and her siblings to be whizzed through the universe on their rescue mission… We’re not the only ones to still love this brilliant and complicated book, either: it got written into the famous head-scratcher of a TV series, Lost. If it’s good enough for JJ Abrams…

One of the best war satires ever written, Catch-22’s special brand of hyperbolic lunacy has aged spectacularly well; we think Milo Minderbinder, if he were in operation today, would be having a field-day taking on government catering contracts all over the world. For a very long and involved book with an enormous cast, it’s captivating and hilarious and, funny as it is, still captures the particular horror of endless conflict and beaurocratic assignment.

An early example of the now-ubiquitous true crime genre, Capote’s study of a murder case in Kansas in 1959 still has the power to shock. His near-fictionalized approach to characterization and plot-development in the story of the slaughter of Herbert Clutter and his family and the trial and conviction of Richard Hickock and Perry Smith was criticized by some of its subjects, who questioned the book’s veracity, but Capote’s innovative approach to form remains fascinating even today. Sure, it’s not technically a novel, but it very closely mimics the way one might operate, and so we’ve snuck it in here anyway…

Bulgakov’s best-known novel, a satirical fantasy starring the devil and his retinue of gangsters and their only opposition, a madman known as the Master and his lover, Margarita. Although, not strictly a book of the 60s as it was written in several drafts between 1928 and 1940 (with the subtext, pretty clearly, being Stalinist Russia) it didn’t get published until 1967. This was, alas, nearly thirty years after the author’s death. The satire is as biting as ever today, and Bulgakov’s ambition in mixing fantasy and politics remains a high point for those who like their prose both brilliant and ballsy…

Okay, ‘novel’ might be pushing it, but this kids’ classic is a deserved favourite: the simple poetry of the accompanying text are hardly matched in most adults’ prose fiction today. ‘In the light of the moon a little egg lay on a leaf’ – come on! What better way to learn to read can you imagine? The drawings are gorgeous, there’s true narrative tension (Will the caterpillar eat too much? What’s happening inside that weird cocoon?) and it’s as popular with toddlers today as it was in the 1960s. Naysayers, be damned! We adore this book.

From the gorgeous to the grotesque – O’Connor’s probably best know today as a short story writer, and her collections are outstanding, but this, her second novel, is a prime example of the Southern Gothic school of writing that’s maybe best represented today by Cormac McCarthy. The Violent Bear It Away tells of Francis Tarwater, a boy who’s struggling against the destiny his fanatical old great-uncle has set out for him as a Christian prophet. O’Connor’s writing is more Old Testament than New, as far as energy and event goes, desire her own Christian beliefs, and this book is as harsh and bleak and funny and true as anything we’ve read from this century. Check it out.

A group of Scottish schoolgirls are taken under the wing of their school teacher, Jean Brodie, an anti-conventional woman ‘in her prime’ who’s disliked by the establishment (the other teachers) and suspecte to be a subversive influence. Spark’s proleptic (flash-forward) structure and her complex characterization and treatment or morality (Is Jean Brodie revolutionary or manipulative?) Short and deep and enormously acute, we want to reread this on a monthly basis.

Bewildering and complex, like all Pynchon’s work, this is another short and intense number and an excellent example of postmodernist US fiction. Our heroine, Oedipa Maas, is a Californian housewife who’s left in charge of her ex-lover’s estate and ends up on a peculari fact-finding mission when an odd symbol keeps recurring…. Underground organizations, conspiracies, paranoia and rare stamps: it’s not a quick read, despite its length, but it’s an intriguing puzzler that has inspired the likes of Radiohead and William Gibson. If you haven’t yet tried Pynchon, here’s a good place to start.

To wind down, here’s a miserable little tale of suburban and marital unhappiness, miscommunication and alienation. It’s been adapted into a film version starring Leonardo diCaprio and Kate Winslet, but as usual, the book is better. Yates’ unadorned, Carver-like prose here in his debut sets the tone for the rest of his oeuvre – it’s all sadness and thwarted ambition and bad relationships. Not one to give your new spouse as a wedding gift, perhaps, but still one to be savoured. Suburban angst is still alive and kicking, after all! 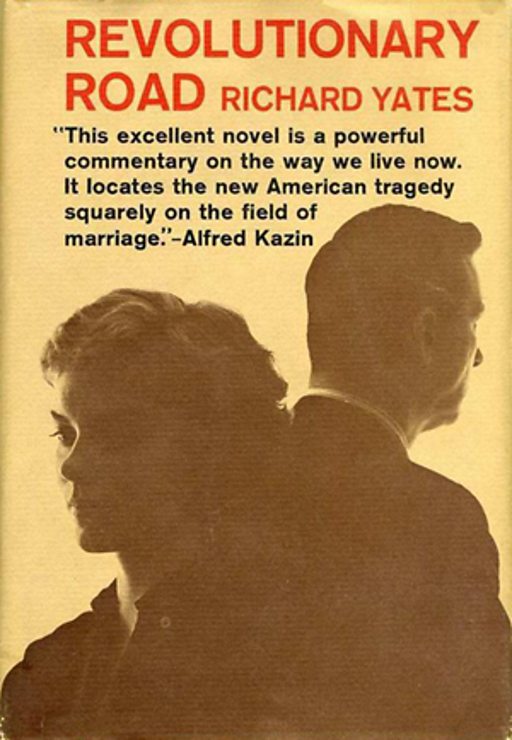 Letter down: The day Andy Warhol's art got rejected