British naturalist Charles Darwin is undoubtedly one of the most iconic figures in history, laying the foundation for evolutionary theory and completely changing how we view the world. But what do you know about the man behind the theory? We’ve rounded up 23 fascinating facts about the “Father of Evolution” that just might change how you see the stern-faced, bearded man that was behind one of the most important scientific endeavors in history.

1. Darwin shared a birthday with Abraham Lincoln. Both men were born on February 12, 1809. That’s not all that the two had in common – they were both abolitionists.

2. Young Darwin wasn’t a remarkable student, and his father didn’t have much hope for his future, telling him that he “cared for nothing but shooting, dogs, and rat-catching, and you will be a disgrace to yourself and all your family.”

3. He was a bit gullible as a child. In one instance, a friend told him that he would be able to take whatever he wanted from a cake-shop for free if he wore a special hat and moved it a certain way. This proved to be untrue when the shop-keeper rushed at the young thieving Darwin, causing him to drop his goodies and make a break for it as his pal stood by and laughed.

4. Darwin’s earliest memory was from when he was a little over 4 years old and went sea-bathing with his family near Abergele.

5. He had a love for chemistry in school, earning him the nickname “Gas”.

6. 12-year-old Darwin had smelly feet, writing ”I only wash my fett [sic] once a month at school, which I confess is nasty, but I cannot help it, for we have nothing to do it with.”

7. Darwin went to medical school, but dropped out partly due to loathing the sight of blood, and partly due to simply finding it extremely boring.

8. He married his cousin, Emma Wedgwood.

9. Darwin enjoyed reading, and the works of Shakespeare, Jane Austen, William Wordsworth, and Elizabeth Gaskell were among his favorites. He often read read Milton’s Paradise Lost while aboard the Beagle.

10. Darwin enjoyed riding the large tortoises that lived on the Galapagos islands, remarking that it was difficult to keep balanced.

11. He also ate the tortoises. The Beagle was loaded with 48 specimens, which were promptly eaten.

12. One tortoise that managed to avoid becoming Darwin’s dinner, Harriet, was owned by both Darwin and Steve Irwen. Harriet was taken from the Galapagos Islands in 1835 by Darwin to England, and was sent to warmer Australia in 1842. She was moved to the Australia Zoo in 1987, under the loving care of the Irwen family.

13. Darwin didn’t just eat tortoises, he ate whatever he could get his hands on. While he was at Cambridge University, Darwin participated in the “Gourmet Club,” which met once a week to eat strange animals (such as a brown owl, which was said to be “indescribable” in a bad way). He also ate armadillos and iguanas while on his voyage. 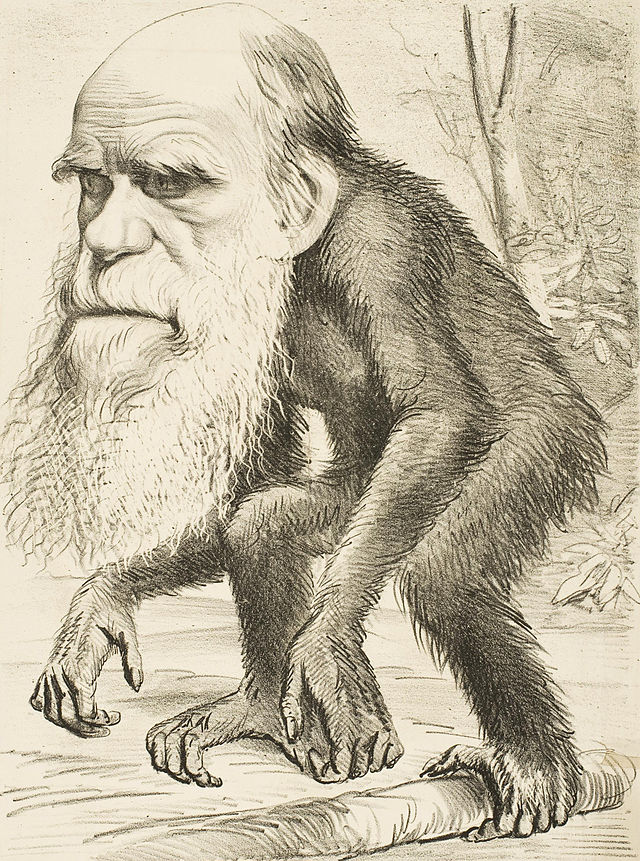 14. Phrenology, the pseudoscience in which a person’s skull shape supposedly determines psychological attributes, made an appearance on at least two occasions in Darwin’s life. He was nearly rejected from the Beagle voyage by Captain Robert FitzRoy, who thought the shape of his nose revealed a lack of determination. Darwin was also apparently phrenologically well-suited to become a clergyman, writing:

“A few years ago the Secretaries of a German psychological society asked me earnestly by letter for a photograph of myself; and some time afterwards I received the proceedings of one of the meetings in which it seemed that the shape of my head had been the subject of a public discussion, and one of the speakers declared that I had the bump of Reverence developed enough for ten Priests.”

15. Charles Darwin and Joseph Hooker are said to have started the world’s first terraforming project. The project took place on Ascension Island in 1850, and turned an arid volcanic wasteland into a self-sustaining ecosystem made of foreign plants from around the world.

16. Darwin let his children doodle on the pages of the original manuscript of On the Origin of Species.

17. Darwin would take long walks while thinking, and had a special “thinking path” that he named Sandwalk Wood at Down House, his home in England. In order to keep track of the many rounds he walked without interrupting his thoughts, he would set up a row of stones that he would kick aside as he passed.

18. Many things have been named after Darwin, including places like Mount Darwin, Darwin’s tubercle (a point located on the ears of approximately 10.4% of the population), and the Darwin Awards, which “recognize individuals who have supposedly contributed to human evolution by self-selecting themselves out of the gene pool via death.”

19. Darwin used the word “evolution” in print only once, in the closing paragraph of On the Origin of Species. He preferred the term “descent with modification,” partly because evolution had already been used in previous theories, and partly because it carried a sense of “progress” not present in his ideas. Herbert Spencer and others popularized “evolution.”

20. Darwin played two games of backgammon with his wife Emma every night for about 40 years. Because he saved the scores, it’s believed that Emma was the better player.

21. Darwin was a self-described agnostic. A British evangelist known as Lady Hope claimed to have witnessed Darwin’s deathbed recantation, but this tale is false according to his family.

23. Darwin had a merry laugh. From a description in a letter written by Jane Grey, who stayed with the family at their home in 1868:

As for Mr. Darwin, he is entirely fascinating— He is tall & thin, though broad framed, & his face shows the marks of suffering & disease, for he has been a very great invalid, & still leads a life of rule & regulation— He never stayed long with us at a time, but as soon as he had talked much, said he must go & rest, especially if he had a good laugh— His hair is grey, & he has a full, grey beard cut square across the upper lip, but the sweetest smile, the sweetest voice, the merriest laugh! And so quick, so keen! He never hears a remark, it seemed to me, but he turns it over, he catches every expression that flits over a face & reads it, he is full of his great theories & sees the smallest things that bear upon them, & laughs more merrily than anyone at any flaw detected, or fun made— Full of warmest feelings & quick sympathy, reads or has read to him novels of every kind, & yet carries on there profound investigations, with the most minute & patient experiments; & the number of topics he has taken up & studied & experimented on— He saluted me merrily Sunday morng. as the lady who “had ten novels unfinished in her head!”

Which of these 23 facts about Charles Darwin surprised you the most? Let us know in the comments below, or share an interesting fact about him that we didn’t include.