Everyone knows what a witch looks like – tall pointed hat, hooked nose, long chin, not to mention the obligatory broomstick. It should be easy to spot one a mile off! The only problem is that witches, throughout history, looked very much like anyone else. Luckily, there were several sure-fire ways of identifying whether Mr or Mrs Jones down the road was secretly doing you harm.

The most well-known method of identifying a witch was the swimming test. The suspected witch was thrown into the pond or stream with a rope around his or her middle; if they sank, they were innocent, if they floated, they were guilty, the water rejecting the wickedness of the witch.

Long-since practiced on the Continent, the first case of swimming a witch in England was in 1612 in Bedfordshire, when Mary Sutton was thrown into the water by one Master Enger after he accused her of killing his livestock. Mary sank a little before floating, but upon being returned to the water for a second time, she was said to have whirled around like a whirlpool, refusing to sink even when the rope was tossed up and down by those holding it, thus confirming her guilt. Both Mary and her mother were hanged on 7th April, 1612.

Mark of the Devil

When entering into a compact with the Devil he was believed to mark the witch as his own, either by a claw or branding iron. The mark could be anywhere on the body, but was often concealed, such as under eyelids, armpits or within the cavities of the body itself. Any discolouration or distortion of the skin, such as birthmarks, moles or scars were suspect. A Devil’s mark was easy to identify as when pricked or, more accurately, stabbed, with a needle or pin, they would not bleed.

In Newcastle-upon-Tyne in 1649, the magistrates called in a notorious pricker from Scotland, with the promise of twenty shillings per proven witch. Thirty women were duly rounded up, and one by one declared to be guilty. One however was saved by a Colonel Hobson; upon witnessing one “personable and good-like woman” fail the pricking test, he insisted on her being tried again after her terror had diminished somewhat. The needle was again duly inserted into her thigh, and this time the area bled profusely, losing the pricker his twenty shillings in that case at least.

It was important to take note of any animals that were often in a suspected witch’s presence, as they might not be what they seemed. These “familiars”, as they were known, were used by a witch to assist in their evil doing. Toads, cats and hares were common choices, with snakes and black dogs also reported. A familiar could also be of human form, and were often classed as demons sent by the devil.

In 16th century Essex, Agnes Waterhouse went to the gallows for urging her cat, Satan, to kill her neighbour’s hogs and cow, and to ruin the beer and butter in exchange for a drop of blood and some milk. A young girl also insisted she had seen a demon in the form of a black dog that was sent by Waterhouse, a fact supported by the accused’s own daughter. Waterhouse was the first witch hanged in England on 29th July, 1566 at Chelmsford.

Being polite to a suspected witch was recommended; those who did not often found themselves the mercy of ill-events after an altercation that they could not otherwise explain. Pets and livestock could suffer, beer and butter fail, children become ill, and that was often only the start of it if you were unlucky enough to fall victim to a witch’s maleficium, or malevolent magic. Not constrained by earthly boundaries, the witch often appeared in the bedrooms of her victims, continuing her tormenting ways.

In 1665, Rose Cullender and Amy Duny from Lowestoft were arrested on the pretext of causing illness in seven children, including making the daughters of Samuel Pacy vomit pins. They were executed a few days after being found guilty.

Not to be confused with the Devil’s Mark, the teat was a natural physical abnormality on the witch’s body that was used to suckle the familiar or imp that the devil sent to aid the witch. An extra breast or nipple or even a fold of flesh could be suspect.

The infamous Witchfinder General, Matthew Hopkins, refused to be swayed by explanations of haemorrhoids or scarring from childbirth to account for the extra tissue. He insisted that in most cases the teat was actually found in a contrary area, making such excuses irrelevant.

One thing everyone was expected to be able to do was recite the Lord’s Prayer. Due to their inherent wickedness, however, a witch would not be able to do so, nor recite scripture, a sure sign of being in league with the Devil.

Jane Wenham failed this test despite several attempts in 1712, and was found guilty by the jury and sentenced to death. The presiding judge, Sir John Powell, was sympathetic towards Wenham however; at his intervention she was granted a reprieve and finally a royal pardon after a fierce and furious pamphlet war between those for and against the accused. Wenham lived out her days under the protection of Earl Cowper, dying of natural causes in 1729.

Weighing a witch against the bible was another indication of guilt; a witch was considered soul-less and therefore weighed less than a person who had not signed their soul away to the devil. If the suspect was weighed and found to be lighter than the book, guilt was established, but if they were heavier then the soul remained and they were not a witch.

In Salem, Massachusets, a suspected witch was weighed against a metal bound bible. In Oudewater in Holland, the weighing house became famous during the 16th century when those accused of witchcraft travelled from as far away as Germany and Hungary in order to prove their innocence. They would stand on one side as they were interrogated, after which cast iron weights were put on the other side. Those who were cleared received a certificate to prove the fact. The scales are still there today and draw in a great tourist trade.

It was a well-established fact that a witch could not cry real tears. The reason for this was simple; the devil would help the accused to not feel pain in torture, and also the belief that a witch was not fully human and thus incapable of the usual run of human emotions. In the Maleus Mallificarum, inquisitors are cautioned against the wily ways of witches to produce fake tears upon their faces using her own spittle, and should be watched carefully to prevent this happening. 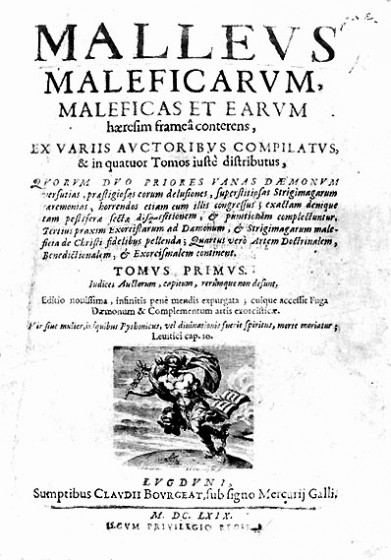 8 historical ways to spot a witch, all of which are sure to help you protect yourself from any potential harm (especially if you manage to get your hands on a time machine). Which of these do you think is the most interesting? Let us know in the comments, and be sure to check here for more witchy weirdness!

Willow C Winsham can be found blogging about The Witch, The Weird, and The Wonderful at winsham.blogspot.com and on Twitter. When not running around after two small children and crocheting a never-ending blanket, she also spends her time researching local “witches” and working on her novel.