The Olympic flame arrives in Berlin, 1936.

Climbers bringing down corpses of their fellow climbers from Mont Blanc, 1895.

Searchlights on the Rock of Gibraltar, 1942.

Gold diggers marching through Chilkoot pass, the only way towards Dawson City, 1898.

Toffs and Toughs – The famous photo by Jimmy Sime illustrating the class divide in pre-war Britain, 1937.

Photographed in 1912 with red and black paint on it, this iceberg was believed to have sunk the Titanic.

A rare colour photograph of two Parisian women from 1930.

The world’s last commercial sailing ship, The Pamir, rounding Cape Horn for the last time in 1949.

Japanese guards bow before US prisoners of war being released from a Yokohama detention centre following the capitulation of Japan, 1945.

Iranian woman hanging out on the beach before the Islamic Revolution, 1960.

James Dean posing in the coffin in the local undertaker in his home town the year he died in a car crash, January 1955.

British soldier checking out the Argentinean helmets after the Battle of Goose Green on the Falkland Islands, May 1982. 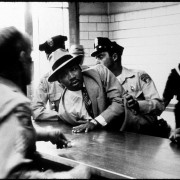