We can all be thankful that he chose this path. Why? Because he is one of the civil rights movement’s great unsung heroes. A Marine, who’d once been a boxer, this white Alabama native was perhaps an unlikely supporter of the cause. Yet when Martin Luther King Jr. was arrested in Alabama in 1958, Moore was there. When police dogs attacked anti-segregation demonstrators in 1963, Moore was there. When a march for voting rights culminated in tear gas and police clubs in 1965, Moore was there.

In the photo above Dr. Martin Luther King Jr. is pushed against a police desk as his wife looks on. The year was 1958 and Luther King Jr, was arrested while trying to attend a hearing for civil rights leader Ralph Abernathy in Montgomery, Alabama . He was later released when his identity became known to the police, but not before Moore had captured his arrest. The 27-year-old photographer for the Montgomery Advertiser happened to be the only photographer on the scene. His photos of the even were distributed nationwide by the Associated Press, and one was published in Life magazine. A new career had begun. It was shots like these, which helped give American’s a unique insight into the movement and the risks their leaders took. Martin Luther King Jr was himself arrested nearly 30 times.

Over the next seven years, Moore shot some of the most important pictures of the civil rights movement. His photographs helped bring the reality of the situation to the magazine’s huge audience, which at the time comprised over half the adults in the United States. Needless to say, it was a tough time for him both mentally and physically. In the 2005 documentary Charles Moore: I Fight With My Camera, produced by Daniel Love, Moore said, “For all journalists covering the Civil Right’s movement during the 60s it was difficult, exhausting and often very dangerous. For me it was all of the above, plus troubling and emotional way because I’m a southerner too.” Yet his most famous shots in the the dogs and fire hoses in Birmingham, the Selma Bridge, and Martin Luther King’s arrest in Montgomery, among many others, doubtless helped quicken the passage of the Civil Rights Act of 1964. The noted historian, Arthur Schlesinger, Jr. said that Moore’s photographs transformed the national mood and made the legislation not just necessary, but possible.

Moore also photographed the civil war in the Dominican Republic, political violence in Venezuela and Haiti, and the Vietnam conflict. His editorial and travel photography appeared in major magazines in the United States, Europe, Japan, and South America. In 1989, Charles Moore received the first Kodak Crystal Eagle Award for Impact in Photojournalism. Subsequently, he lectured and presented his work at universities and photography workshops around the country. Sadly, he died in 2010 aged 79. However, his iconic images and the impact they made will endure for many, many years to come. 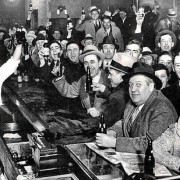 Advice from the “First American”: 17 of the wisest Benjamin Franklin quotes
1 reply

Advice from the “First American”: 17 of the wisest Benjamin Franklin qu...