Although some few laws and restrictions existed beforehand, the turn of the 20th century saw a striking rise in child labor in the United States, with an estimated 1 in 6 children between the ages of 5 and 10 being engaged in “gainful occupations”. This trend alarmed many Americans, and thus began a decades-long struggle to end child labor. Photographer Lewis Hine was a driving force in the struggle, documenting child labor all over the country and giving a face to the cause.

Hine, a sociologist and teacher who supported the idea of using photography for education, was hired by the National Child Labor Committee (NCLC) in 1908 in order to garner public support for labor reform. He often risked physical danger by bluffing his way into factories in order to document the working conditions, resulting in thousands of powerful photos of child laborers that remain some of the most recognized photos in history. Below are some of these photos, along with the original captions.

“I don’t never git no rest.” This is the attitude that Henry, a six-year old beet worker takes toward life, on a Wisconsin farm. (Wisconsin, July 1915)

Luther Wharton, drug store delivery boy, twelve years old. Works from 4:00 P.M. to midnight in Sommers Drug Store. I saw him working at midnight. He goes to school in the daytime, then works from four to twelve. Sundays half a day. Gets $5.00 a week. “I take medicines to the Red Light places several times a day. Yes I know some of the people there.” This is a pretty heavy burden, both physical and moral, to place on this adolescent boy. (San Antonio, TX–Oct 1913) 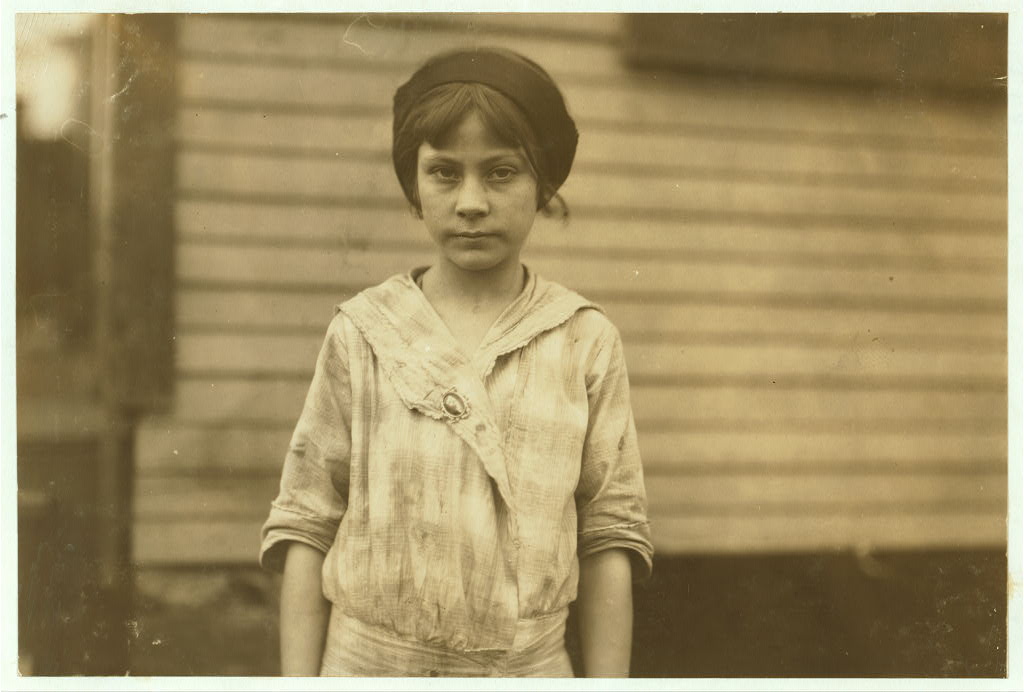 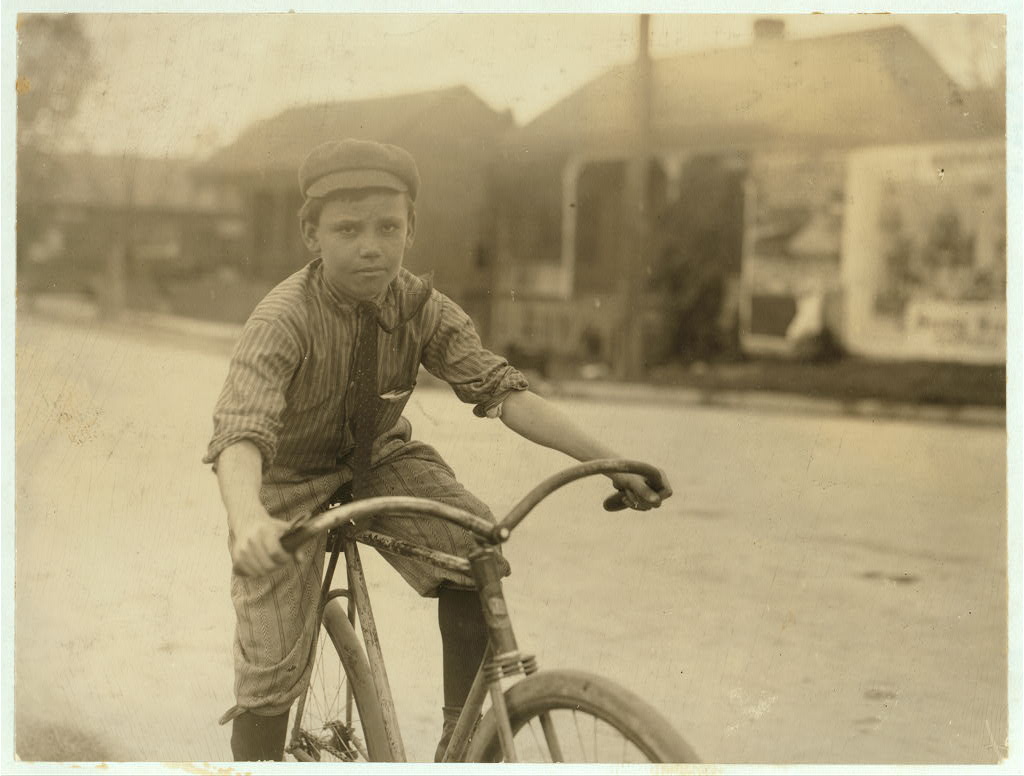 Percy Neville in the heart of the Red Light district. Just come out of one of the houses with message (which see in his hand). He said gleefully “She gimme a quarter tip.” (Shreveport, LA–Nov 1913)

Donald Mallick, (“Happy”), 203 King Street. 9 years of age, selling newspapers 5 years. Average earnings 35 cents a week. Sells from choice. Father, rivet driver, $20 weekly. “Happy” is well known character in town. When first interviewed gave story of sleeping in broken buildings and lots at night. Found out in streets at 11 P.M. at night pitching pennies and working “last paper” scheme. Flips cars and has sister who is 8 years of age who begs and sells papers. Boy very imaginative, and when last seen had a rusty 5 inch knife which he said he found and was playing with same in gutter.

Mill boys pitching pennies on the Main St. in the afternoon. One said he sweeps. One said “I was workin’ but got canned ’cause I was not fast enough.” The other was “jest hangin’ around.” (Fall River, MA–June 1916)

B.F. Howell, Route 4, Bowling Green, Ky. and part of his family stripping tobacco. The 8 and 10-year old boys in photo “tie up waste”; his 12-year old boy and 14-year old girl (not in photo but they lose a good deal of schooling for work) are regular strippers. Photo taken during school hours. (Bowling Green, KY–Nov 1916)

6-year old Jewel Walker, picks 20 to 25 pounds of cotton a day. Father said: “I promised em a little wagon if they’d pick steady, and now they have half a bagful in just a little while.” (Comanche County, OK–Oct 1916) 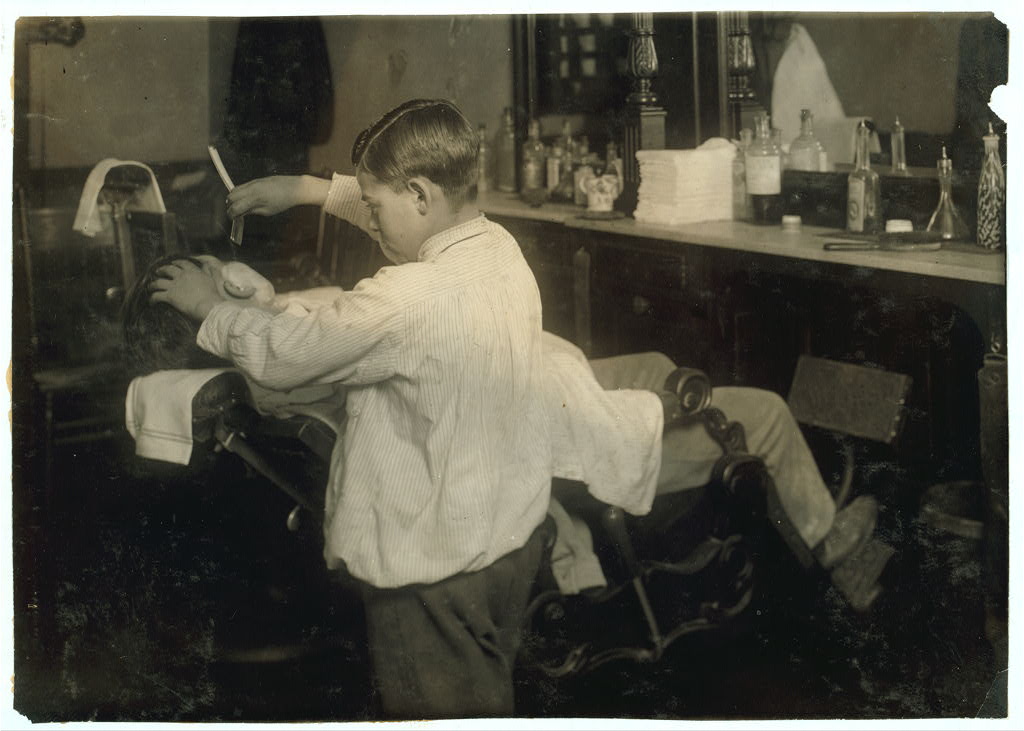 Sanitary Ice Cream Cone Co., 116 S. Dewey St. (Cisar, Manager). John Myers, 14 years old, who is in Grade 6 in Franklin School works after school and Saturday. He has been there 7 months. Can bake cones as well as pack them. For a month in the Fall, after school started, he went to school and worked from 4 p.m. to midnight. Expects to do it again soon. Gets $4 a week for part time and $8 a week when working 8 hours a day. (Oklahoma City, OK–April 1917) 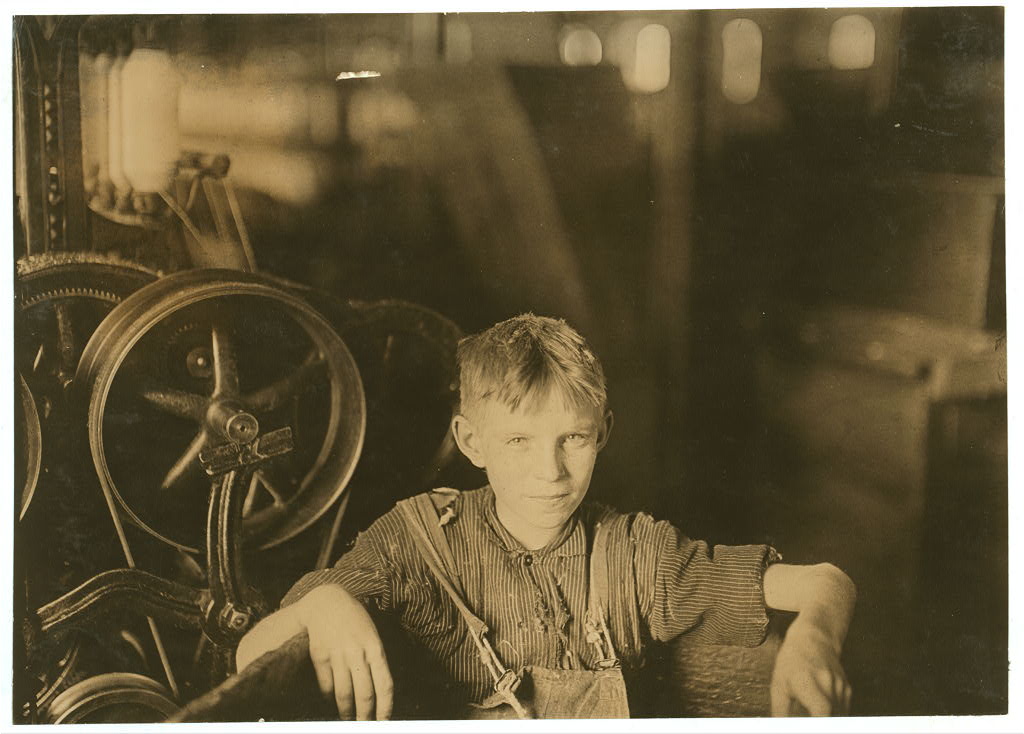 One of the young spinners in the Quidwick Co. Mill. Anthony, R. I. (A Polish boy Willie) who was taking his noon rest in a doffer-box. (Anthony, RI–April 1909)

Young cotton mill worker. A piece of the machine fell on his foot mashing his toe. This caused him to fall on to a spinning machine and his hand went into the unprotected gearing, crushing and tearing out two fingers. (Bessemer City, NC–Oct 1912)

Drivers in a Coal Mine Co. Plenty boys driving and on tipple. No trappers used, as mine is ventilated by another system. (West Virginia–Oct 1908) 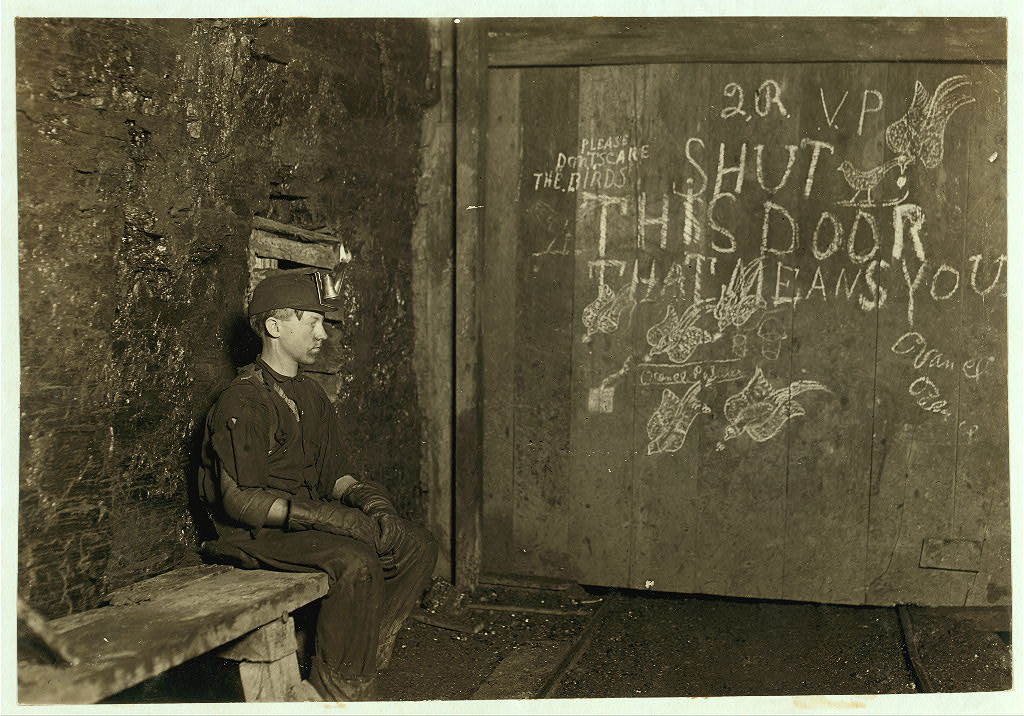 Vance, a Trapper Boy, 15 years old. Has trapped for several years in a West Va. Coal mine. $.75 a day for 10 hours work. All he does is to open and shut this door: most of the time he sits here idle, waiting for the cars to come. On account of the intense darkness in the mine, the hieroglyphics on the door were not visible until plate was developed. (West Virgina–Sept 1908) 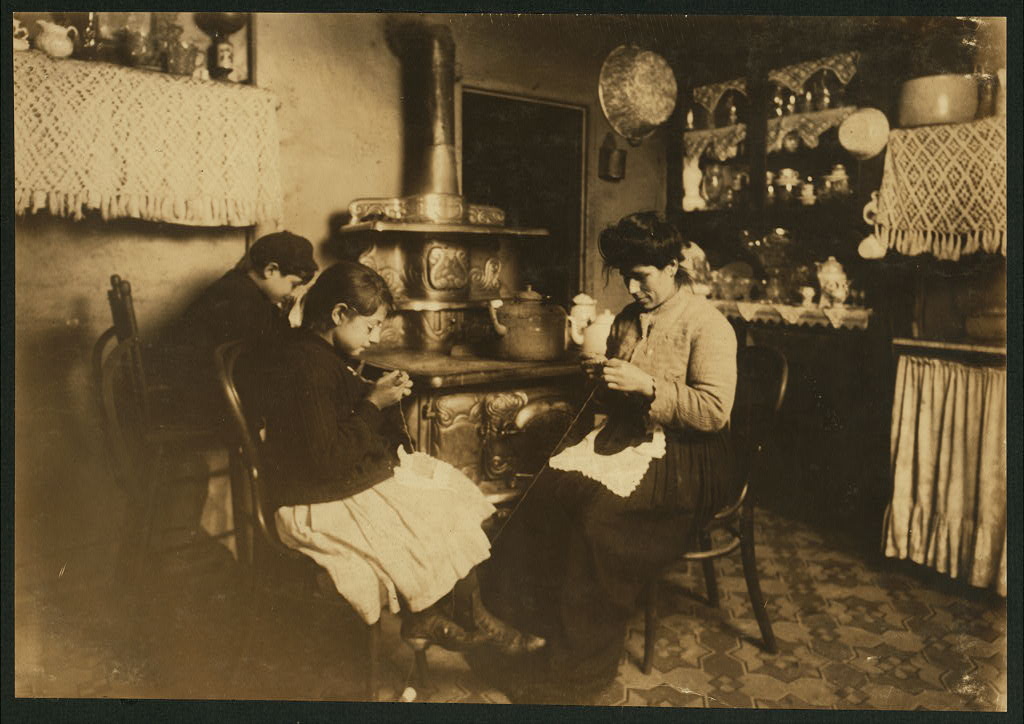 One of the spinners in Whitnel Cotton Mfg. Co. N.C. She was 51 inches high. Had been in mill 1 year. Some at night. Runs 4 sides, 48 cents a day. When asked how old, she hesitated, then said “I don’t remember.” Then confidentially, “I’m not old enough to work, but I do just the same.” Out of 50 employees, ten children about her size. (Whitnel, NC–Dec 1908) 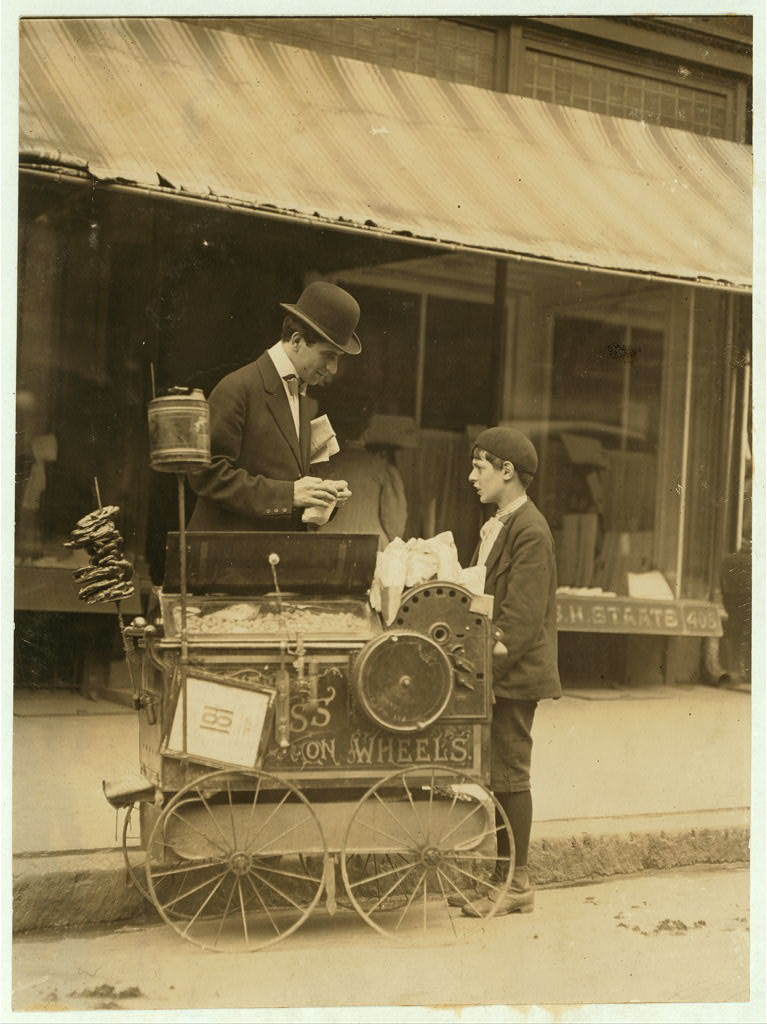 Joseph Severio. Peanut vendor. 11 years of age. Pushing cart 2 years. Out after midnight on May 21, 1910. Ordinarily works 6 hours per day. Works of own volition. Don’t smoke. All earnings go to father. (Wilmington, DE–May 1910)

Father loafs while children work. He has no employment (Marion Zerpoli, 145 Hudson St., N.Y.) Mother picks nuts in Habicht, Braun Nut Factory, Hudson and Laight Sts., N.Y. Gets $4.00 a week. The children say they make $3.00 a week. Michael is 13 yrs. old. Madeline, 6 yrs. old and has cross eyes. Were working in a very dim light (no gas or lamp used except when most necessary). (New York, NY–Dec 1911)

Eagle and Phoenix Mill. “Dinner-toters” waiting for the gate to open. This is carried on more in Columbus than in any other city I know, and by smaller children. Many of them are paid by the week for doing it, and carry, sometimes ten or more a day. They go around in the mill, often help tend to the machines, which often run at noon, and so learn the work. A teacher told me the mothers expect the children to learn this way, long before they are of proper age. (Columbus, GA–April 1913) 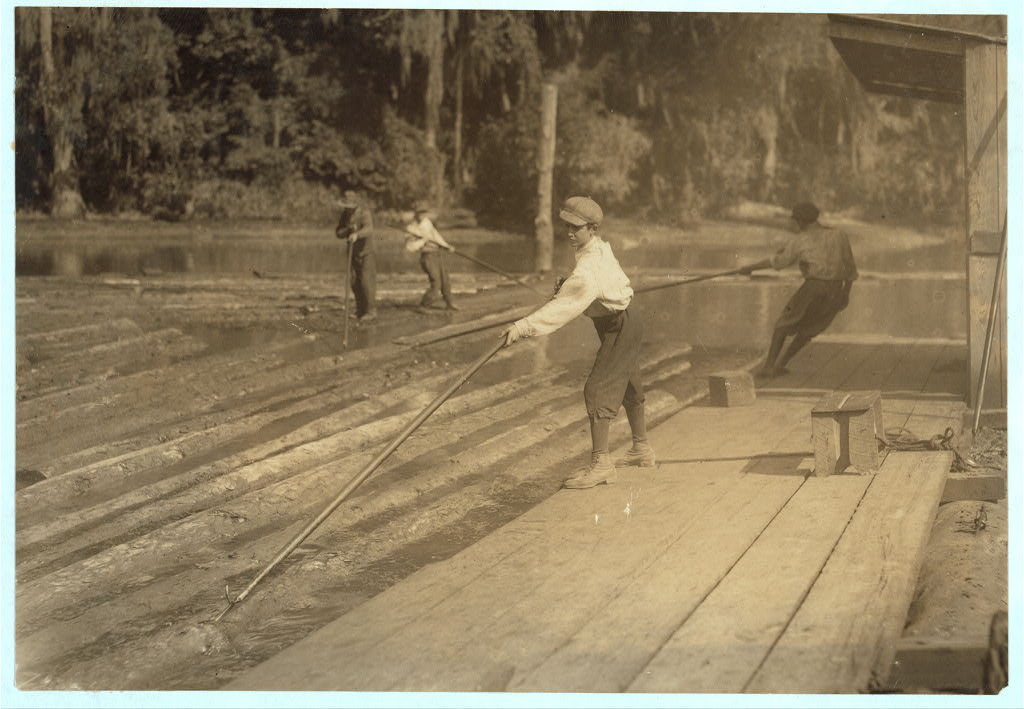 Hard work and dangerous. This “river-boy” Lyman Frugia. Poles the heavy logs into the incline that takes them up to the mill. It is not only hard work, but he is exposed to all kinds of weather and is dangerous too. Said he is 14 years old, has worked here several months, gets one dollar a day. Miller & Vidor Lumber Company. This is the only mill I found around Beaumont that employed boys – likely because they are located some distance from town. (Beaumont, TX–Nov 1913) 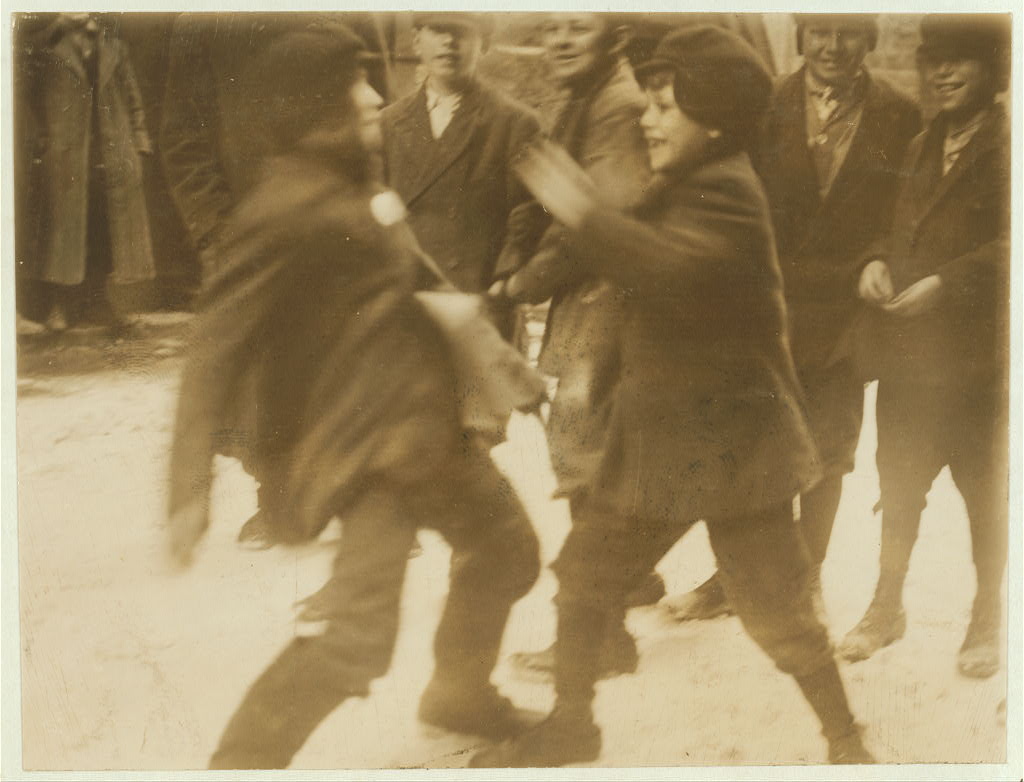 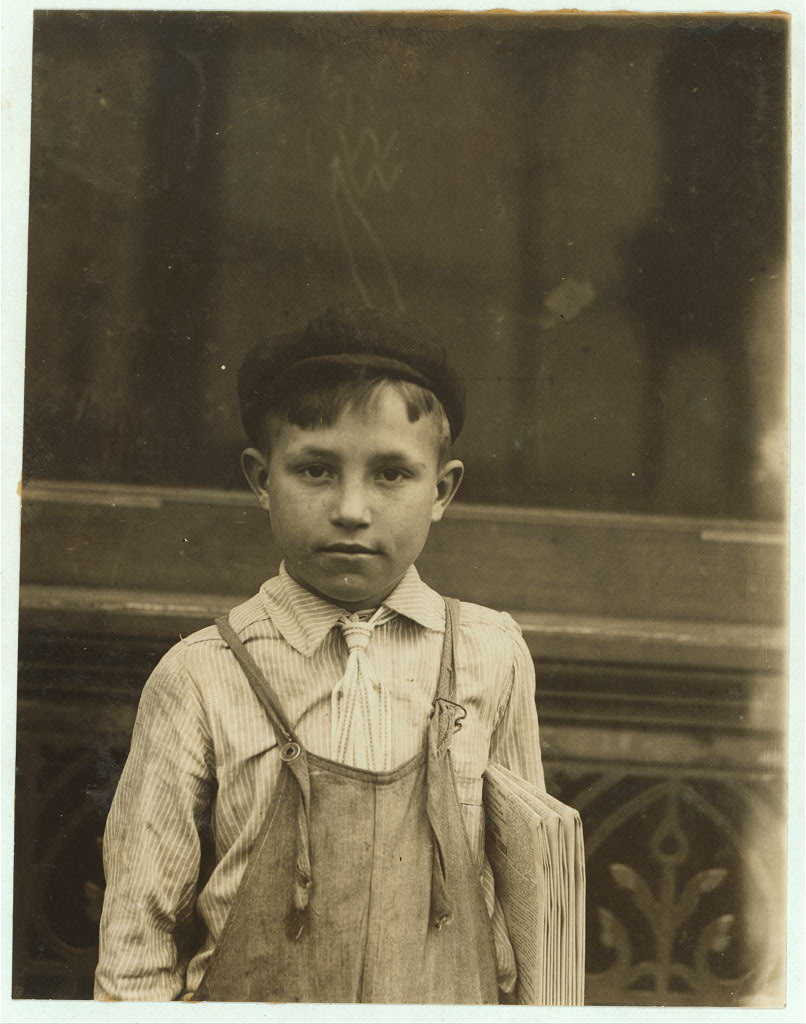 The work of Lewis Hine gave the NCLC’s campaign the publicity that it needed to be heard, and many states began paying stricter attention to violations of child labor laws. In 1938, Congress passed the Fair Labor Standards Act, prohibiting “oppressive child labor”.

Hine’s photographs and descriptions still resonate today, providing us with an intriguing but sobering glimpse into the past. What do you think? Let us know below. 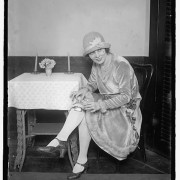 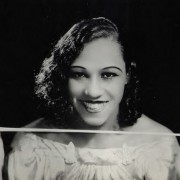