Let’s jump straight to the end

When Hunter S. Thompson committed suicide in 2005, the world lost not only a colourful contrarian, but the founder of gonzo journalism, the unique style of first person storytelling many of us have come to love. The police investigation into his death concluded that his self-inflicted gunshot was, more or less, an attempt at maintaining control over chronic pain.

Maybe this should come as no surprise. Ralph Steadman, known for his trippy illustrations of some of Thompson’s writing, recalled a much younger Doctor discussing the freedom offered by suicide. Killing himself, it seems, was often on his mind. But how did Hunter get to the point in life where he felt he had to pull the trigger? To find out, let’s take a look at his weird and wonderful career.

Known for his laser sharp wit, Thompson’s definite claims to fame came through his Rolling Stone writing about politics and sports. Critics may have their say on his disinterest in developing his style after the early seventies, but many a writer can probably identify with Thompson’s career choice. He clung to writing, which as he told American TV interviewer Charlie Rose in 1998, was the only thing he felt he could do.

Fulfilling a destiny of profound rudeness

Before getting started at writing in his twenties, the young Hunter S. Thompson had managed to drop out of high school, going to jail for robbery and entering the US Army.

Before long, the Army washed their hands of the young Thompson, who wasn’t a team player and disliked authority. At the age of 21, he found himself living in a Greenwhich Village basement apartment, working as a “copy boy” at Time Magazine.

Feeling he could do better, Thompson typed a letter, asking the Vancouver Sun’s progressive editor-in-chief, Jack Scott for a job.

Even though the letter emphasized Thompson’s broad writing skills, mastering “warmongering propaganda to learned book reviews”, he didn’t get the job. He did however pick up the habit of writing letters to prominent figures, as documented in the 1998 book “The Proud Highway: Saga of a Desperate Southern Gentleman, 1955-1967”.

Thompson found his breakthrough in his non-fiction debut “Hell’s Angels: The Strange and Terrible Saga of the Outlaw Motorcycle Gangs”. The book, based on reporting for The Nation, received critical acclaim for its research into the infamous motorcycle club’s subculture over the period of a year.

Possibly overstaying his welcome as an observer of Hell’s Angels, Thompson had witnessed his relationship with the club turn sour during the writing process. Ultimately the Angels and Thompson had a fallout caused by the writer interfering with a member’s practice of domestic abuse, something considered a strictly private family matter by the club.

For a sobering peek into last-century relationship politics, check out this clip from a Canadian stop on the book tour. A well-articulated Hell’s Angels goon dismisses Thompson’s book as “cheap trash” meant to hurt a peaceful tribe of mostly upstanding citizens. Thompson, apparently a lifelong mumbler, laughs nervously while the Canadian studio audience cheers at the Angels’ spokeshole explaining the context of the incident: “To keep a woman in line, you gotta beat her like a rug every once in a while, you know”.

We peaked in Bat Country

With the peak of the hippie scene right behind him, Thompson churned out “Fear and Loathing in Las Vegas”, a 1971 Rolling Stone article turned career defining novel. In the story, disillusionment with sixties counterculture is studied through all kinds of looking glasses during a mischievous weekend in ugly, gluttonous Las Vegas.

“Fear and Loathing” as a struggle for a glimpse behind the curtain of the American dream is obfuscated by a world-class depiction of the psychedelic emotional landscape. The narrator goes through it all so the reader doesn’t have to: synesthetic confusion, paranoia and restless post-trip searching for meaning.

The main character Raoul Duke is obviously Thompson himself. But his companion, Dr. Gonzo, is worth some attention in his own right. Behind the book’s pseudonymous “300 pound Samoan” was Oscar Zeta Acosta.

Being a Mexican American empowerment activist, attorney but also a politician, Acosta’s eventful life included frequent harassment from the Los Angeles Police Departement, not to mention ending up in jail while running for the office Sheriff in LA County. Ultimately Acosta went missing while travelling in Mexico. The last his family heard from him was a telephone call in May of 1974, in which he stated that he was “about to board a boat full of white snow”.

In terms of Hunter S. Thompson’s career development, anything past the mid-70s is really latter days.

Substance use began to take its toll on Thompson, resulting in diminished professional reputation and messy debacles. In 1976, Rolling Stone’s publisher cancelled a big contract for him to cover the election that year. In other words, no sequel to “Fear and Loathing on the Campaign Trail ’72”.

Making matters worse, Rolling Stone assigned Thompson with a trip to Saigon to sort through the end of the Vietnam War. The gig got cancelled upon the writer’s arrival in Saigon, leaving him stranded.

Complaints on his writing turning repetitive may have contributed to Thompson becoming more reclusive during the 80s and 90s. Work continued, but his output of columns and books became more sporadic with several last-minute publishing cancelations taking place.

Major assignments with the Rolling Stone became few and far between after the 1976 incidents. The above photo is from a 1992 Rolling Stone interview cover story about then senator Bill Clinton, a collaboration between several writers.

Doubtlessly, Thompson’s cult status bought him considerable patience from trusted editors as the 20th century drew to a close. Gonzo journalism had become a thing and some publications understood Thompson as the weird package deal he was. As colleague David McCumber commented on Thompsons’ columns: “one week it would be acid-soaked gibberish with a charm of its own. The next week it would be incisive political analysis of the highest order.”

With the right kind of eyes, the influence of Hunter S. Thompson is visible to the curious reader. One example: Check out Matt Taibbi starting with his great work for Rolling Stone on subjects like the Obama administration and the financial crisis. Taibbi spikes his significantly more sober content with unbeatable Gonzo quotables like the one below.

“Barack Obama, a once-in-a-generation political talent whose graceful conquest of America’s racial dragons en route to the White House inspired the entire world, has for some reason allowed his presidency to be hijacked by sniveling, low-rent shitheads.” – Matt Taibbi, on the Obama administration’s Wall Street influences.

Movie projects, TV documentaries and interviews brought Thompson new fans and friends alike. Actors Bill Murray, Johnny Depp, John Cusack and Benicio Del Toro were from time to time associated with adaptations of his work and have reported indulging in the bat shit crazy Thompson seemed to live and breathe.

To some, Thompson ended up looking stuck with the expectations of his humorous erratic behavior. Sure, there’s a strained, druggy and sad vibe in appearances of Thompson’s. A 1997 shooting range segment on Conan O’Brien’s show comes to mind, as does portions of the 2000 documentary “Breakfast with Hunter”. But then again, the same tense, mumbly neurvousness is present in the mid-60s TV sequence we discussed earlier.

With his wild impulsivity, mail order doctorate degree in Divinity and failure to graduate from high school, Thompson comes off as genuinely differently wired. In today’s world, you’d assume him getting medicated with amphetamines, or other Viagra for the unfocused and impulsive mind, starting in first grade.

And after all, how much of a phony can you be if Johnny Depp agrees to pay for your remains to be spread over your property, by means of fireworks?

The Doctor wouldn’t have it any other way. 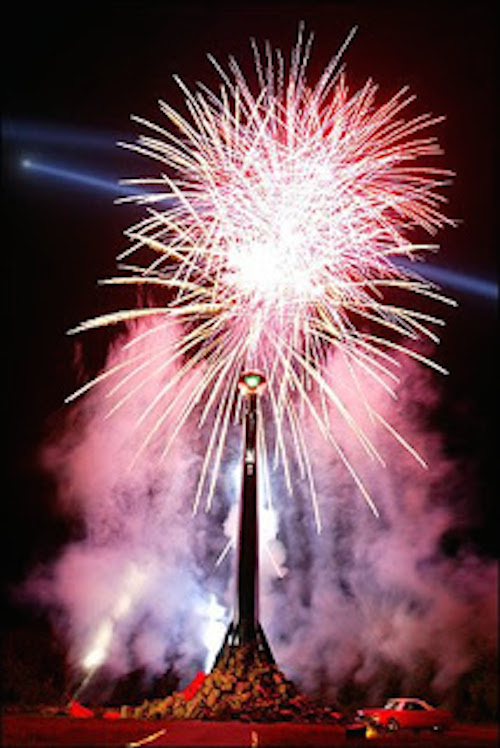 10 everyday words we got from science fiction writers
6 replies